Poor Olivia. In Stephen King’s Mr. Mercedes, her car became a horrific weapon in a terrible mass murder, and instead of comfort or pity, she got blame and dislike.

Her money and her fancy condo couldn’t help her in the end–no one could. From the first interview with the police in her parlor she was doomed to rub people the wrong way and seem cold and uncaring after the Mercedes Killer took her car and ran into a crowd, killing men, women, and children in line at a job fair one misty morning.

After Olivia killed herself, her fancy condo by the lake was left to her sister, Janelle. Janey and Olivia likely had very different styles. But since Janey served Detective Hodges coffee in china on a silver tray, I imagine she left the condo much the same at first and was going to add her own touch as time went on. Here’s what I imagine it might look like. 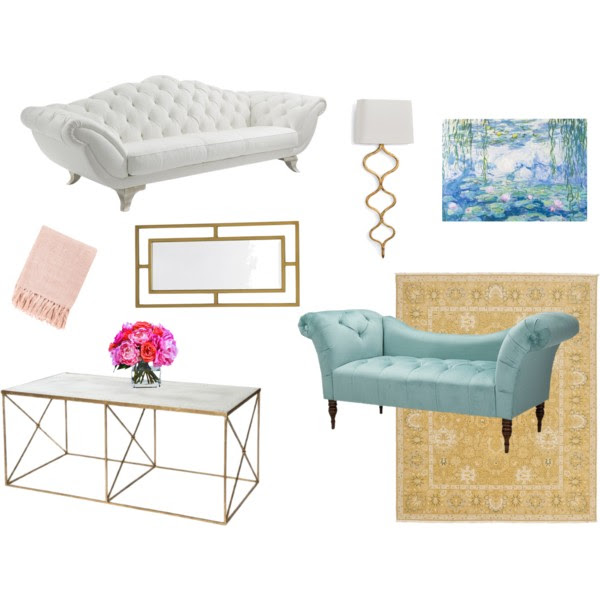 I am sure the condo was coordinated. A mix of modern and traditional–Olivia had good, and expensive, taste. And she was always put together. You wouldn’t find this condo messy and wouldn’t find fake gold where it could be real.

I wish Olivia had better days in her condo before she died, and I’m glad Janey brought some smile and cheer into it. I’m sure it was a beautiful place, even with a dark past.

You can see some of my other thoughts on Mr. Mercedes here. (I really liked it!) I was talking with Michael recently about what our screennames were, back when everyone used AOL instant messenger. Mine was raendrop316 and I thought it was really clever because my name sounds like rain AND it incorporated my first name and last initial. The numbers were just because I liked the numbers 3 and 16. Nothing clever there.

In Stephen King’s new book, Mr. Mercedes (kindle here), they don’t exactly go back to AOL, but the killer does reach out to a detective using an anonymous messenger service and usernames. And they are just as clever as my 13-year-old self.

The killer uses the merckill. You know, for the Mercedes Killer. The detective’s is kermitfrog19. You know, because his first name is Kermit.

Although the screennames might be a callback to old technology, the rest of the tech in Mr. Mercedes keeps up with the times. Many books eschew technology completely, either by setting the story in a different world or time, or just ignoring its use altogether (much like how on TV shows, everyone shows up at each other’s homes instead of giving them a call). It’s fun to see it used realistically and efficiently in Mr. Mercedes. Someone leaving their phone in their car leads to miscommunication, funeral arrangements can be made on an iPad, and a killer can IM just as easily as leaving an old-school letter for someone to find.

One of my favorite things about King is how his books echo real life. Maybe not in their plots (I hope you aren’t communicating with an anonymous killer, at any rate), but in small events that mirror the small events in your own life. Like getting mad at someone for sleeping through phone calls when you need them, or being embarrassed your hacked emails got sent to your colleagues, or making a screenname based off a nickname and some numbers you like.

I’m about halfway through Mr. Mercedes, and it has been a fantastic summer read. That is, if you like your beach reading about murder mysteries instead of a summer romance (though there’s a little bit of that, too). The boring realities of iPads and work emails don’t seem boring when King tells their story, and the characters are more relatable and realistic because of it. And if the “boring” parts of Mr. Mercedes are this fun, what does that say about the exciting parts?