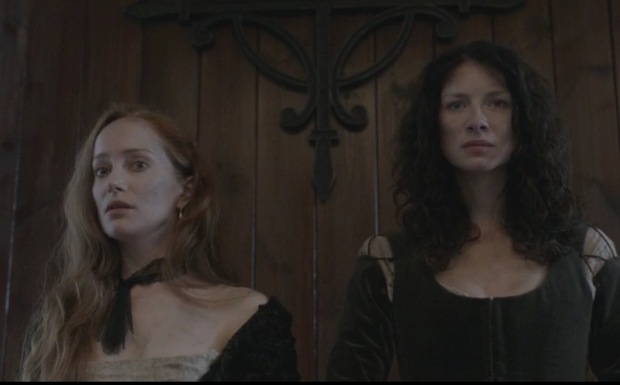 To be a woman in 2015 culture is to speak the truth in a crowd and have no one believe you. It is to never be able to find the right balance of what that crowd thinks women should be. It doesn’t matter if you do everything to fit their expectations or if you are fiercely yourself–either way you’ll get burned.

Geillis worked within her system, but that system still trapped her in the end.

Claire and Geillis’ witchcraft trial was doomed from the start, but at several points I still hoped maybe they could logic their way out of trouble. (Silly me, I know logic doesn’t work.) Witness after witness builds a case against them, using evidence generally based in truth, but framed so that witchcraft looks likely. (Because women couldn’t diverge from expectations all on their own.) Their lawyer, Ned, works the case by systematically discrediting each woman witness. He first frames a young woman maid as an unhappy, whining woman who is going after her employer. He then gaslights a grieving mother by telling her that because she didn’t step in when she saw Claire holding a child, that it was the mother’s fault the faeries didn’t come for her son. And when Laoghaire says Claire used potions to steal Jamie’s heart, Ned paints her as a jealous, scorned harpy (ok, that one is unfortunately true).

Ned doesn’t discredit the male witnesses–the crowd jumps in to condemn Claire and Geillis each time a male witness speaks. As each witness makes their case, Claire tries to tell the crowd what really happened. So many times being a woman can mean screaming over and over what you know to be true while others ignore you and drown out your voice. Claire’s arguments often make the trial worse–but how could it be worse, really, and how could she stay silent.

As the trial goes downhill, Ned says that their only option may be to save one woman instead of both of them. To do that, he suggests Claire say that Geillis is the witch and that Claire was under her spell. (Of course one woman must turn against another to save herself, for there is a limited allotment of space and resources for women to live on.)

Claire refuses to disown her friend, and she stands with Geillis to face their fate together. In that moment of friendship, Geillis shares her biggest secret yet. That she is from 1968. Of course she is! She’s such a ’60s babe. I dont know where Geillis is from originally, but no matter where it was, I am sure she was a hippie.

When Jamie bounds in brandishing his sword to save Claire, it is a relief. (She needs her husband to save her, and even then it might not be enough.) As Geillis looks on, she decides to do what she can to save her friend. So she gives the crowd what it wants and confesses to being a witch who tricked Claire.

Claire and Geillis reconnect in this episode, unfortunately under terrible circumstances. Their late night talks and shared looks on the stand were great to watch, and I’ll miss them if they are gone for good. Since we didn’t see her die, I have hope that Geillis is still somehow alive because I’d hate to lose her wit and for Claire to lose her friend. Especially when that friend also has time-traveling experience.

After watching Geillis get taken away to burn at the stake, Claire and Jamie steal away to safety. As Jamie tends to Claire wounds, he asks her for the truth.

And she tells him.

Jamie has risked his life to help Claire on numerous occasions, but the most heroic thing he has ever done is simply to believe her. In a world (past and present) where women often have to defend every assertion and prove every experience, to be heard and believed is a rare gift. Jamie doesn’t have to understand Claire or what happened to her, he just has to listen. And in doing so, he gives her the greatest support.

Jamie also listens to Claire’s choices, even when he doesn’t like them. So he hears her when she says she wants to go home, and he takes her to Craigh na Dun.

But Claire chooses to stay with Jamie. (And, girl, I get why.) Jamie and Claire’s relationship is rare in any century, and I can’t wait to see where they go with their new shared knowledge.