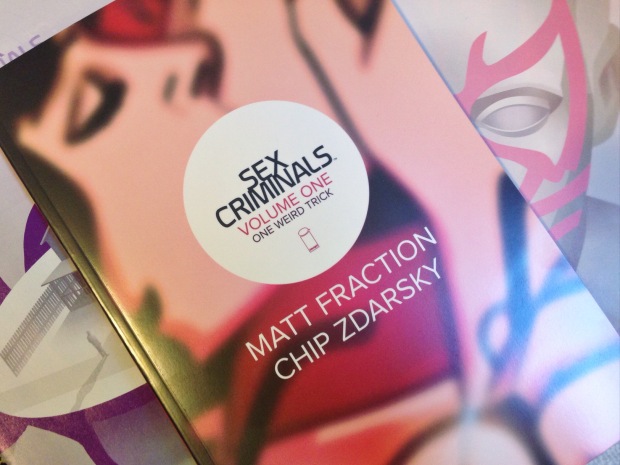 When I was reading Sex Criminals, I saw one of my most embarrassing real life moments play out in the pages. But when it happened to Suzie instead of me, it was a lot funnier.

My embarrassing moment happened when I was in college and I went to the student health center. (A lot of stories probably start this same way.) I don’t remember the specifics of what was wrong with me or why I went there, and if I did I probably wouldn’t say, but I do vividly remember the doctor seeing a mark on my skin. And I remember them not knowing what it was.

So they called in a few more doctors. And a few other nurses. And any one else they could find. To look at me, partially dressed, and an unknown mark on my skin. That they must have decided was nothing because I don’t remember being treated for it, or ever finding out what it was.

Suzie’s moment came when she went to talk to her gynecologist about birth control. Instead of finding an irregular mark, Suzie’s young, attractive doctor found her textbook-perfect cervix. And called in every intern at the doctor’s to see it, too.

For a young woman with a questionable sexual event in her own life who gets shot down every time she tries to talk about it, having people line up to look at her cervix probably doesn’t even make her top five biggest embarrassments.

The greatest part of Sex Criminals isn’t the relatable characters, or the funny moments, or even the great art–it’s that this comic takes deeply embarrassing stories that no one ever wants to talk about and turns them into the funny, charming main event. And doing so makes it a little easier to laugh and talk about it in your own life.

Suzie realizes as a teenager that she can make time stop when she orgasms (as if sex isn’t confusing enough for teenagers without a super power). She spends time alone in the Quiet, as she calls it, until she meets Jon, who has the same mysterious gift. Then they spend time in the Quiet together. And that’s when things begin to get (even more) interesting.

Sex Criminals is so fun and one of my favorite comics this year (though the subject matter may not be for everyone, and definitely this is not a comic for kids, if the title didn’t give it away). The first volume is out now, volume two will be out in February, and you can pick up current issues at your local comic book store or on Comixology. It’s also in the final round of the Goodreads Choice Awards. Cast your vote for your favorite comic!