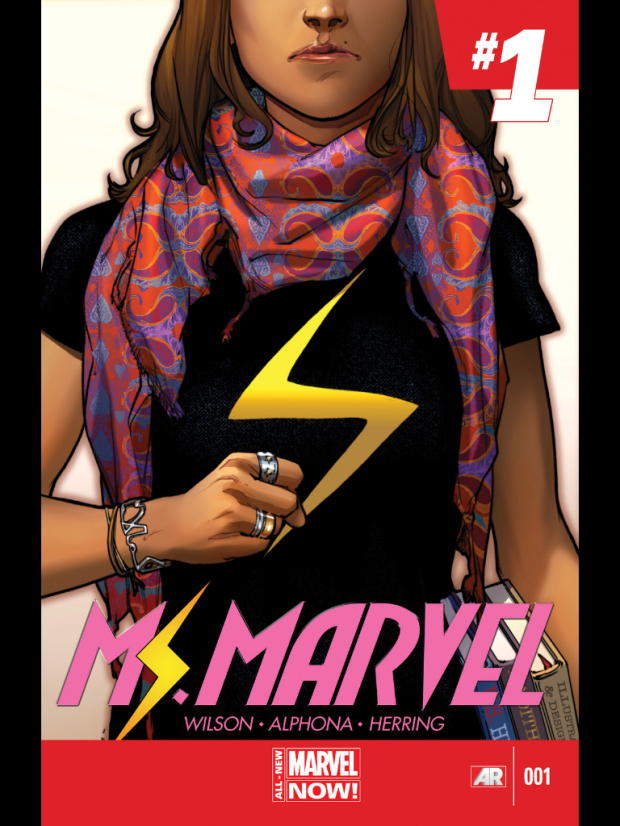 Every girl, every teen, every person has felt out of place. The things that connect us all, especially in superhero comics, are feelings of loneliness, wanting to fit in, and wanting to be a part of something bigger. That’s not a man thing or a woman thing; that’s a person thing. And that’s what Ms. Marvel is about.

Ms. Marvel is a Marvel comic book series written by G. Willow Wilson and illustrated by Adrian Alphona. I heard the buzz when it was announced the new Ms. Marvel would be a Muslim American woman, and an interview in Vulture with Wilson especially piqued my interest. I’m two issues in and the storytelling is charming and relatable–which is what makes it so refreshing. The third issue of the monthly comic comes out today. (I buy a lot of comics electronically through Comixology, but you should also definitely check out your local comic book store.)

Kamala, a 16-year-old who lives in Jersey City, wants to go to a party, and her parents won’t let her. She looks up to the popular girls while feeling small and embarrassed when they are around. She wants great hair and killer boots. Her problems are my problems. Her emotions are all of our emotions–or have been, at some point.

We learn when we are young to copy people who look like us, maybe by emulating a big brother or your cool next door neighbor. More voices and more variety in comics (and movies and TV and at work and school and everywhere) isn’t just a suggestion, it is critical. When we see all kinds of people in our stories, it let’s us know that we can do it, too. That we can live, that we can have goals and interests, that we can connect with other people and thrive because someone else did it, and they are like us.

But Ms. Marvel doesn’t make the story about Kamala’s religion or that she’s a woman. It tells the story of regular teen angst, of sneaking out and getting caught. Of what to do at a party, and how to deal with going through a lot of change.

I’m not totally sure what I think about Kamala turning blond to be her superself, but that’s part of the point. She thinks blond hair and some thigh-high boots would solve her insecurities (who hasn’t thought that once or twice?), but Kamala feels just as out of place in a different body.

Kamala learns quickly that it’s not what you look like that makes you a superhero. Here’s hoping the rest of the industry learns this, too. And quickly.