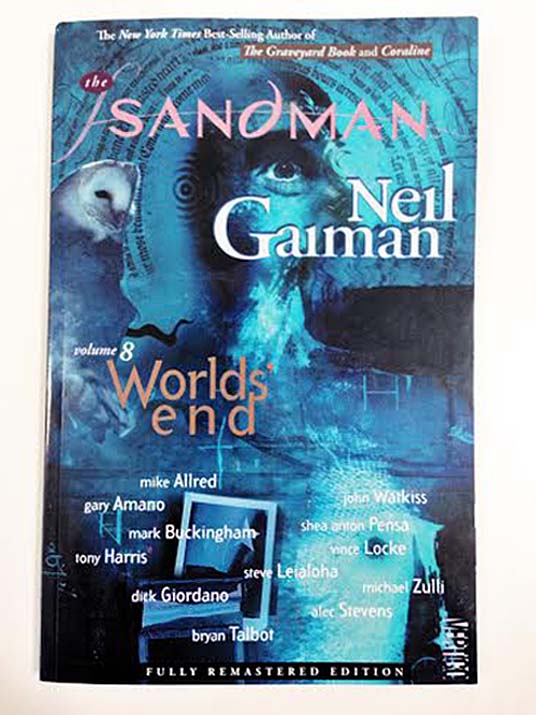 Stories are how we connect to one another. Whether we tell these stories with the clothes we wear, or with our voice, or with our body language, these connections are as necessary as breathing. And Neil Gaiman has never made this point as beautifully as in World’s End. (At least, until I get to the next two volumes of The Sandman.)

As a group of travelers hits a reality storm, they end up stuck in an inn until the storm passes. And the price of a stay is telling a tale. These stories celebrate lands from all over many worlds. There are cities of the living and the dead, and other Americas, and monsters on land and under water.

My favorite story in the volume tells of both the living and the dead. In the necropolis of Litharge, masters and apprentices learn and practice their trade of burial. They show respect to all cultures and dispose of their clients in the way the clients choose. And in an air burial, it is tradition to spend time telling stories after it’s complete.

This idea is beautiful and simple: people may die, but stories live on.

This necropolis holds the stories and secrets of the dead, and all the stories in World’s End held secrets for astute readers. They revealed hints of the past and foreshadowed horrors to come. Familiar characters popped up like old friends, and it was wonderful to spend time with them again.

We have a history with the Lord of Dreams and his worlds, and Gaiman trusts that we’ll be able to make these connections. There’s no need to re-explain a character or draw us a map of a place we’ve been before. He trusts his readers, as the best tale tellers do.

It’s refreshing to dive into a story that allows you to draw your own conclusions. This isn’t easy, to be sure. The story has to leave enough clues and at the right times. But if you want a lesson in how to lay a story out, World’s End is a master class.

The ideas and hints Gaiman has planted along the way come together brilliantly in the last few double page spreads. The art is gorgeous and huge. And so is the slow realization of what has happened to these travelers. Gaiman paints pictures with pure heartbreak, and I have not yet recovered.

Just like all forms of heartbreak, I’m not sure quite what to do now. But if you have some time, won’t you tell me a story?

You can read my other posts on The Sandman series here.

(I picked this series on my own and am not being paid to write about it. But these are affiliate links, so if you buy through my links I’ll receive a little bit of money.)