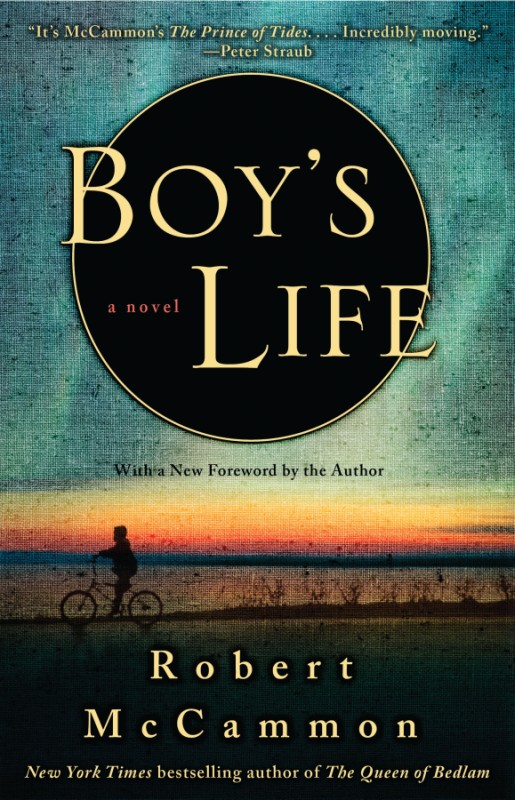 Last week, when I was walking to work, I saw people putting leaves on trees. There was someone on a ladder, someone in a raised platform, and someone on the ground, and they were all using wire to put fake leaves on a tree that had none.

When Cory, the narrator in Boy’s Life by Robert McCammon (Kindle here), is riding on a train with a man who looks suspiciously like Frankenstein’s monster, Cory thinks, “Were these three insane, or was I?”

That’s how I felt.

Cory lives in the small town of Zephyr, Alabama, in the 1960s, and he tells the story of the year he turns 13. His town is full of wonderful absurdities, his adventures are plentiful, and his love for his family and friends is strong and true.

I love a lot of things about this book. But the thing I love most is Cory’s voice. A lot of books use children narrators–children can ignore danger and logic in a way that adults can’t–but adult attitudes, vocabularies, and thoughts tend to sneak through. Cory’s voice is consistently strong and interesting, and he tells stories the way kids see them: big and real and exaggerated and in your face. “Writer? Author? Storyteller, that’s what I decided to be,” Cory says. And a storyteller he is.

And there’s a lot in Zephyr to tell stories about. There’s The Lady and her husband Moon Man, a mythical elderly couple from the black part of town who feed the river monster of Zephyr every year, among other magical things; there’s Vernon Thaxter, who walks around naked and therefore doesn’t come out in the winter; there’s an angry monkey that escapes during a church sermon and poops on about anything it can find; there’s a not-yet-detonated bomb that falls from a plane from a nearby army base through the roof of someone’s house; there’s Cory’s best friends Davy Ray, Johnny, and Ben; and there’s a murdered man who was beaten and tossed into a lake.

It’s this central mystery that ties the town and stories together. The story opens with Cory and his dad seeing a car crash into Saxon’s Lake. Cory’s dad, Tom, dives in to help the driver, but the driver has already gone where no one can save him. He was savagely beaten, strangled with wire, and handcuffed to the steering wheel. Tom reports this to the sheriff, but no one reported a missing man, and no one is officially suspected for the murder.

This mystery is woven throughout Cory’s 12-year-old adventures. While reading about them, I shed more than a few tears and much laughter. Cory’s and Zephyr’s humanity shine through even when tragedy strikes. And Cory sees the absurdity of life that could knock you down if you don’t view it with a sense of humor.

“This story had a boy’s touch,” Cory thought while he was reading science fiction by Ray Bradbury. Boy’s Life had a boy’s touch as well.  But: “You see, it’s a girl’s life, too.” Cory’s story, and the way he told it, showed respect to all people. Girls, boys, black, white, young, old, people who had done evil things, and people who had been heroic. I believe this respect is what we are looking for when we share stories. We are looking to be recognized and valued, and to see something familiar in others. Cory is a young boy, but he is valued by his friends, his family, and his town. Much in the same way Stephen King respects and values youth in his stories, Robert McCammon shows that seeing things from a child’s perspective is worthwhile. Cory’s pains are never trivialized and his ideas are always important. And connecting to Cory means connecting to that part of ourselves that sees magic and wonder.

Vernon Thaxter, the naked man and son of the rich and powerful elder Thaxter, wrote a book once. He told the story of a small town, full of life. But his editors made him throw in some murder because everyone was reading murder mysteries. Cory’s mom said she would have liked the book about the small town if there weren’t all that violence thrown in. In Boy’s Life, I loved the book about the small town, and I loved the parts of the murder. I loved it all.

No spoilers, because it’s too good to ruin the fun surprises you’ll find if you read it, but here are some of my favorite lines:

Have you read this? Did you love it as much as I did?

(I bought this book on my own and am not being paid to write about it. But I am a part of the Amazon Affiliates program, so if you buy through my links on Amazon, I’ll receive a little bit of money for it.)