Normally I’m begging for authors not to explicitly spell things out for their readers. We’re smart, and we can tell who is sad without having to read “John is sad.”

But in Icy Sparks by Gwyn Hyman Rubio (Kindle version here), I needed some things to be spelled out. It was an easy read, but one that left us with more questions than satisfactory answers when we held our quarterly book club meeting. (This time, we did it in person while we were all on vacation. Photo from my mom.) 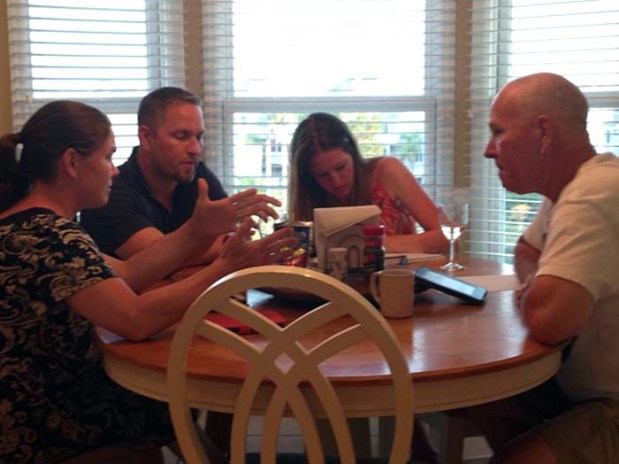 Icy Sparks is about a young girl in the South during the 50s who deals with tics and urges she can’t explain or control. She becomes an outcast and spends some time at a mental institution for observation. It’s a coming of age novel (kind of like Middlesex), and Icy goes through a lot without fully understanding why.

We felt that each plot point in Icy Sparks could have been a more effective tale if the author spent more time on them, and maybe left a few out. When Icy went to a mental hospital, there were some interesting characters–and the book would like you to think Icy’s time there affected the rest of her life. But the mental hospital story was rushed and relationships were skimmed over. So the interesting bits weren’t teased out enough and I didn’t much care about Icy’s time there.

I have the same feelings about Icy’s first love, first horror, and first real loss. Which is to say, I didn’t feel much at all.

It’s too bad because there was an interesting framework and Icy Sparks could have been really great insight into what it was like to have Tourette Syndrome in the 50s, when society didn’t know much about it. But they don’t even mention the word Tourette’s until the epilogue, and for someone who is not familiar with the symptoms besides what I see on TV, I could only make an educated guess at what was happening. I never really knew, and I still don’t know what “frog eyes” means.

I also couldn’t quite figure out what Icy had seen Mamie Tillman do at the lake. I asked my family during book club, and my guess was generally right (at least, we think so). But in that instance, and in the rest of Icy Sparks, there should have been more direct clues–especially because seeing Mamie Tillman at the lake had such an effect on Icy.

We were disappointed in the ending [SPOILERS, obvs], which seemed to suggest going to church won’t exactly cure Tourette’s, but it will solve all of your other problems. After Icy attends a Pentecostal revelation where she becomes more comfortable with who she is and joins the choir. Using music can be an effective way to get relief from some of the symptoms of Tourette’s (apparently–we looked this up later). But with a rushed ending that only focused on how much everyone loved and accepted Icy when she sang, it was hard to know how singing in a gospel choir tied into the rest of the story.

Our next book is my brother’s pick: House of Leaves by Mark Danielewski. No Kindle version here, friends. For House of Leaves, the format and delivery is part of the story. In this book, Johnny Truant finds a trunk full of documents in a dead man’s apartment. This book is the bound version of those documents, with an introduction from Johnny himself. It’s an interesting read so far, and one where the reader is piecing together the mystery as they go based on what looks like first-person documents and research notes. Plus, well, a lot of other interesting clues along the way. It’s sort of scary, a lot creepy, and seems like it has a Blair Witch/Paranormal Activity vibe going on. I’m glad we are doing it as part of book club so we can talk to each other about it.

Please check it out and join us! This books seems like it will need a few book buddies to discuss it with.  Our deadline to read it is the end of September.

(I bought these books on my own and am not being paid to write about them. But I am a part of the Amazon Affiliates program, so if you buy it through my links on Amazon, I’ll receive a little bit of money for it.)